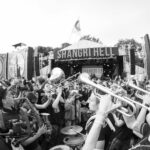 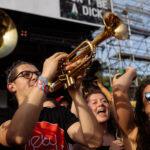 New York Brass Band are North Yorkshire’s only contemporary New Orleans inspired Brass Band. Hailing from the ancient streets of York the band are at the forefront of a funky brass revolution that is sweeping the UK. Inspired by Rebirth Brass Band, Soul Rebels, Hot 8, Youngblood and Brassroots, NYBB pack a powerful punch of relentless drums, rumbling tuba and wailing horns… nothing kicks a party into gear like the sound of a smokin’ New Orleans Mardi Gras Jazz Band

New York Brass Band is a powerhouse 7/8-piece, with a line-up of percussion, sax, trumpets, trombones, guitar and sousaphone. The band take its inspiration from contemporary New Orleans musicians, but have a repertoire that ranges from a full on set of party covers to sets of male and female vocals, to thrilling jazz and New Orleans sets. This is repertoire that’s evolved and been refined over a decade of gigs giving us music for any occasion.

The band was formed in November 2010 by James Lancaster, and quickly established itself as a dynamic, flexible band who can perform outside acoustically at a drinks reception or street event, or amplified on a festival stage or club. No gimmicks, no backing tracks, no auto tune, this is music that gets people dancing and a band who make the audience feel part of the show!

We annually play at three of the biggest parties on the planet. In June we travel to Glastonbury, in August we play at Notting Hill Carnival in London and in February we play at Carnival in Rio de Janeiro. We’ve played at festivals and events all over the world including Georgia, Malta, Italy, Switzerland, Luxembourg, Spain, China, Kuwait, Holland, Belgium and Brazil and other events include Bestival on the Isle of Wight, Durham Brass Festival, Cork Jazz Festival, Le Tour de France, Monaco Grand Prix all 7 summer cricket test matches and celebrity parties and weddings for Danny Jones McFly comedian Alex Brooker, Liam Gallagher, Joe Jordan, Gordon McQueen and Jamie Oliver.

We are one of a small number of Glastonbury bands who can be booked to play at your wedding.

We can perform all sets, COVID safe, acoustic and socially distanced.